What I Miss (and Don’t) about Living in Turkey

2019 is here, and with it a new year of planning and traveling, both domestically and abroad. I’m working to build consistency with this blog and have a wider variety of posts, which is a continuation of my goal from 2016, so please look for more posts in the future!

This post is a throwback to my time in Turkey, looking at both the positive and the negative. (Disclaimer: I know people have different experiences. This is just my perspective.)

I’ve never been big on eating breakfast.  Eating in the morning usually means less time in bed, but I found that I could get up for kahvaltı (“breakfast” in Turkish).  It’s probably my favorite part of the Turkish culinary experience. 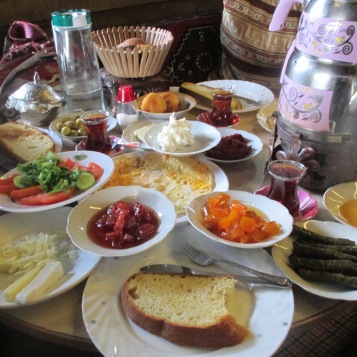 In Hamamlıkızık, a small town near Bursa 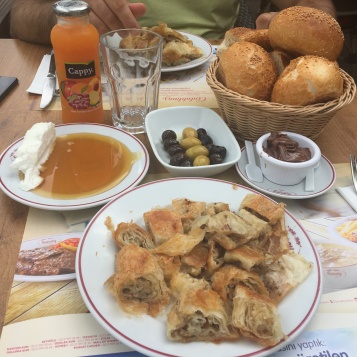 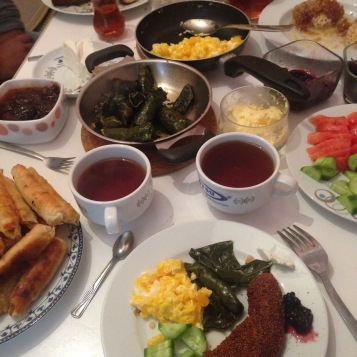 At a friend’s house

The best way to describe it would be like tapas or little small plates of breakfast foods. The general dishes are:

Any combination of these dishes depends on where you eat, of course.

This video comes from when I visited my boyfriend, his sister, and his brother-in-law in Izmir. We drove to Şirince, and I had one of the best meals of my life.

Eating a kahvaltı is like brunch in the U.S., where there’s no rush to finish. We usually stayed for a least two hours. I have been looking for a Turkish breakfast in Washington, DC, but nothing is comparable to what I had there.

I wasn’t a big fan of the nightlife. In Islam, drinking alcohol is forbidden, but you can still buy it in Turkey. However, it’s heavily taxed. As a result, going out drinking in Turkey can be expensive. I nearly stopped drinking altogether while living there, and I still haven’t fully bounced back. (This is probably for the best, honestly.)

In addition, I noticed that most bars and clubs played either Turkish pop, Turkish folk songs (where everyone always knew all the words), or electronic dance music. Nothing is wrong with any of these genres, and I quite like them, but I found myself missing hip-hop and R&B.

Hammams are Turkish bath houses, where you can go and relax, get a good scrubbing, and leave with fresh, clean skin. I loved going to Şengül Hammam in Ankara, which I mentioned before, but I also went to a fancier one in Bolu, a city two hours away from Ankara, that gave us robes, slippers, and face masks. In general, the bathing area has seating and huge sinks around the walls. In the center of the room is a large marble table where you get scrubbed with soap and even coffee. They also have saunas. You can stay in a hammam as long as you’d like and purchase drinks and snacks.

I was first nervous to go to a hammam because women are usually topless. I’ve never experienced anything like this in the U.S., but it’s worth being uncomfortable in the beginning. I even went with my boyfriend’s mom, and it was great!

Until 2015, I had only ever traveled to countries in Europe and the Caribbean and was therefore able to blend into the general populace. This was impossible in Turkey. Aside from the few Cameroonian aviation students I met in Ankara or the Nigerian lady I found through word-of-mouth to do my hair, I never encountered any other black people.

It may sound weird, but I was caught off guard and unprepared for the level of curiosity my presence would spark. A few weeks after my move, my roommates and I decided to go to the hammam. We were almost there when an elderly man saw us, stopped, and literally planted himself in the middle of the sidewalk to stare at us. Not only that, but when we passed him and looked back over our shoulders, the man had turned around and was still staring. This happened all over the country, except in Istanbul, and it was interesting because nobody ever gave me a dirty look. I assumed they were wondering how I ended up in Turkey. But I never could adjust to the idea that it’s okay to stare at someone so openly in public.

This carried over to people asking to take pictures with me, which I always declined, unless they were my students. A couple of people were very pushy about it, and one person tried to secretly photograph me anyway.

My biggest issue was people touching me. I cannot count how many times people in Turkey approached me and immediately touched or attempted to touch my hair. A grocery store clerk essentially cornered me in a store one day to do this, despite me backing away. After 9 months of this, I was fed up.

On the other hand, people were so friendly! I think Turks are amazing hosts, and people were more than willing to invite me and my other foreign friends into their shops and homes for tea or a meal. One of my roommates went outside to feed and pet the stray cats in our neighborhood and returned after four hours with containers of food; some of our neighbors invited her over for dinner. Coming from a country where people value privacy and don’t always talk with their neighbors, it was refreshing to have these interactions.

I will also say that there’s an art to hosting in Turkey. I had some new Turkish friends over and was pleased with myself for brewing tea in my new kettle. The evening passed, however, and none of them drank my tea! When I mentioned this to one of the friends about it later, he said that I never brought it out from the kitchen to the living room with glasses, spoons, and sugar, which is what a good host is supposed to do. Basically, I didn’t follow the rules!

In Turkey’s defense, this is probably something I would deal with in any country, so I expected this part of the move abroad to be a struggle. There were so many instances of having to run around from office to office, store to store, to figure things out. And it’s hard to get information online in English, so you have to talk with people. Customer service was on a different level. Sometimes one person would give one answer, and another person would give a completely different answer. I usually had to pay for any mistakes made (for example, when the cell phone store charged me for the wrong plan), even when it wasn’t my fault.

Two stories can provide a glimpse into my administrative experience.

The first is about internet service providers. My roommates and I signed a 12-month contract with Turk Telecom for our apartment’s internet, although we would only need it for 9 months. Shortly before leaving Turkey, we went to a Turk Telecom office to pay for the last 3 months of our contract in advance. For some reason, the staff couldn’t understand why we wanted to pay early, even though we were insistent. They finally told us that they would cancel the contract after 9 months, and we would just pay like normal if we ever restarted the plan. One of my roommates planned to return to Turkey in August, so she kept the modem in her name. However, we were soon sent our monthly internet charge. The contract had not been cancelled, of course. The bill never got paid, and my roommate (who is now back in the U.S.) has continued to receive emails and bills from Turk Telecom ever since. They had their chance.

The second story occurred when I tried to close my bank account. My last check was set to be deposited on June 15, which was the same date on my plane ticket to depart Turkey. A week before I left, my boyfriend, one of my roommates, and I went to our bank branch to set up a transfer. (Side note: We could only do business inside the bank branch where we opened out account; it’s not like in the U.S. where you can do business in any branch in the country.) After 3 hours, we were able to get all the paperwork for the bank transfer set up. However, they made us take our paperwork with us, claiming “the desks were too messy, and the papers would get lost if we left them there.” Burhan had to bring our paperwork back to complete the bank transfers after we left, thus defeating the purpose of going early.

It was extremely easy to travel in Turkey, and my apartment was conveniently located within walking distance to Ankara’s bus station. Turkey is very well-connected with a reliable bus system and three airlines—Turkish Airlines, AnadoluJet, and Pegasus. Just make sure you know the difference between military and U.S. time so you don’t miss a flight like I did!

Turkey also has a climate for everyone. There’s hot weather and cold weather, beaches and mountains, forests and caves–you name it, it’s there. The photo at the top of the post is me at Pamukkale, which I wrote about in 2015.

The harbor in Antalya

The beach at Çeşme 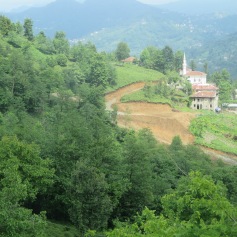 The green hills of Rize

Overlooking the Bosporus in Istanbul

The valleys and hills of Cappadocia

As much as I loved Turkish food, eventually I wanted something else. While you can get international food in Turkey, I found it to be more expensive than Turkish food and oftentimes not as good. I had great Italian, Uyghur, and Persian food, as well as sushi and burgers. I even had pretty good Korean food for Christmas. But I definitely missed Latin American cuisines like Mexican and Cuban, and also soul food and American breakfast. The good news is that living in Turkey made me a better cook because I brought over all my seasonings and just learned how to make what I missed at home.

If you made it this far, thank you for reading! Please let me know what you think in the comments. My next post will dive more into the Fulbright program, which is what allowed me to move abroad.