Enjoying D.C. in the Springtime

After five long, cold, and dreary months, Washington, D.C. is waking up! Springtime brings crowds from all over the country and world here, which is both a blessing and a curse. The locals are coming out more—brunching, jogging, playing sports, and enjoying the atmosphere—which is exciting. In addition, I’m thrilled to not need to wear three layers of clothes under a heavy coat anymore. On the other hand, it’s certainly the beginning of tourist season, and I’m constantly weaving through all the students on school trips that hang out near my job.

I’ll admit that spring is not my favorite season—the Floridian in me will always prefer summer—but overall, springtime is a fantastic time of year in D.C. I’ve been using the season to try new things around the city, as well as continue pursuing my own interests.

A friend of mine works on the Hill (i.e., for a Congressman on Capitol Hill) and got tickets to view the White House gardens. She had extra tickets and offered me a couple, so I decided to take a different friend who was visiting for the weekend. Although I planned on staying away from the White House for personal reasons, I keep receiving invitations from friends to go to various events there. (It’s not the worst problem to have, and I always have a nice time!) In 2016, I attended President Obama’s last Christmas tree lighting ceremony, which was a lot of fun, and took a tour of the West Wing last year. Touring the gardens was my third White House event.

The grass is pristine

The White House gardens were developed in 1825 during John Quincy Adams’ presidency. His father, John Adams, wanted to create a garden decades before but wasn’t able to stay in office and make it happen. In 1972, tours of the gardens opened to the public. When we went, there was a live military band, which added to the festive spirit. 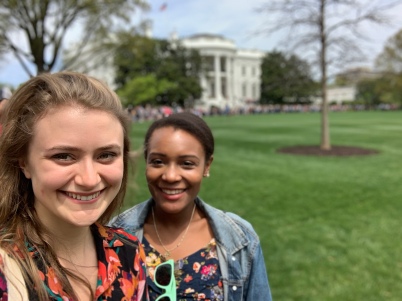 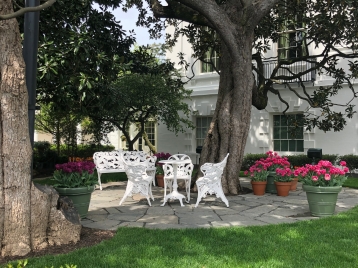 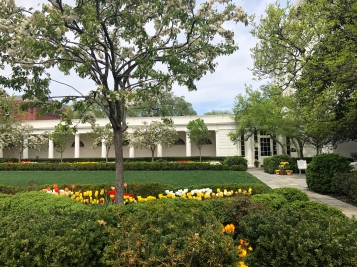 Although the White House lawns were beautiful, there weren’t as many flowers as I expected. Maybe it’s different during other parts of the year. The tour itself seems more like an opportunity to stand really close to the White House, which isn’t necessarily a bad thing. Nonetheless, I still recommend taking the tour if you can, as it only takes about an hour to get through everything. I’m glad that I was able to see Michelle Obama’s kitchen garden and could also peek through some bushes to see the hidden tennis/basketball court.

Not the best angle, but you get the gist!

Following the theme of gardens and flowers, early April was the peak of the 2019 cherry blossom season in D.C. I didn’t know until moving to D.C. (1) the popularity of cherry blossoms, and (2) that they only bloom for around two weeks. A gift from the Japanese government in 1912, the most popular place to view them is down by the Tidal Basin, but there are also other good places, like Dumbarton Oaks and the Arboretum (a large park in D.C. full of different species of trees). 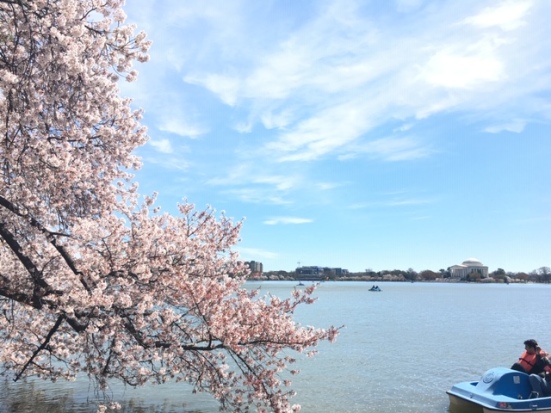 My first time down to the Tidal Basin was in 2017. It was extremely crowded but satisfying. This year, I chose not to go anywhere in particular to view the cherry blossoms and wandered around my neighborhood instead. (Disclaimer: these probably aren’t all cherry blossoms. They just look nice.) 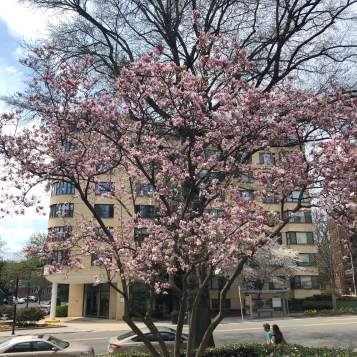 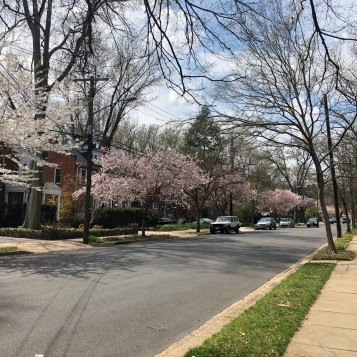 D.C. goes a little crazy celebrating the cherry blossoms, but not in a bad way. There’s a festival, a parade, a pop-up bar, and even themed desserts. But I have a confession: Cherry blossoms aren’t my favorite. Since moving to D.C., I’ve learned a lot about trees, specifically those with pink and/or white flowers, and I definitely prefer magnolias. Cherry blossoms are beautiful, but magnolias are gorgeous and smell amazing.

Outside the U.S. Botanical Gardens

I’m actually surprised that it took me so long to visit this museum, but it’s probably due to the location. The Museum of African Art is on the southern half of the Mall, facing away from the other museums, and is sort of tucked away and out of sight. There’s also a little courtyard in the front of the museum full of those pink and white trees that D.C. loves.

I went to the museum for an event hosted by the Alliance Française, which is an organization focused on French language and culture. They have chapters all over the world, and I’ve attended and volunteered for some of their other events before.

Apparently March is the month of French culture, so the Alliance Française partnered with the museum to offer tours in French. I’m trying to keep my level of French fluency up (although it was much better when I lived in France, of course), and I wanted to challenge myself.

Surprisingly, I understood the majority of what the tour guide was saying, as well as the comments made by some actual French-speakers in the group, and was even able to answer some of the guide’s questions!

I feel very lucky to live in such an international city, where I can find so many cuisines, attend receptions in various embassies, and have intercultural experiences without catching a flight. At the same time, there’s so much to do here outside of cultural events, much like in other cities, such as baseball and hockey games. There’s also the Union Market food hall, where I just went for the first time a few weeks ago. There’s something nice about being a tourist in your own city.