Hey, everyone! One of my travel goals this year was to return to the U.S. Open, and I’m happy to say that I was successful! I’m a huge tennis fan; I love both watching and playing. Despite the fact that the tournament ended in mid-September, I want to share with you my experiences from attending in 2018 and 2019, and also give you an idea of how the process works, which days to go, helpful tips, etc.

The U.S. Open, formerly known as the U.S. National Championships, began in 1881 and is held every year for two weeks around Labor Day weekend (between late August and early September). Held at the Billie Jean King Tennis Center (named after the iconic athlete and activist), it’s one of four Grand Slams, along with the Australian Open in Melbourne, the French Open in Paris, and Wimbledon outside of London. These are the largest tennis tournaments of the year, and it’s my dream to attend each one.

A pleasant surprise from Michael Chang, who won the 1989 French Open and was a finalist at the 1996 U.S. Open!

Tickets are sold on Ticketmaster for a wide range of prices. Depending on when you go, you can get a general admissions ticket for as low as $60. This allows you to watch in any stadium on a first come, first served basis, except in Arthur Ashe, which requires a ticketed seat. I’m not sure if there’s a best time to buy tickets; a lot of people buy early and then have to resell. I imagine that deciding when to buy depends on your risk tolerance.

This year was my second time at the U.S. Open; I first went last year, and the experiences have been very different. Last year, I waited until a few weeks before the tournament and bought a general admissions ticket for $130 for the Sunday before Labor Day. I expected to see crazy crowds due to the holiday weekend, so I arrived at the grounds at 8:30am. The gates don’t open until 9:30am, so you can see that I was very dedicated to the cause. I had to be: I wanted to be in the front row at the practice courts to see Serena! 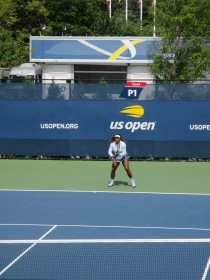 One of the best parts of the day! 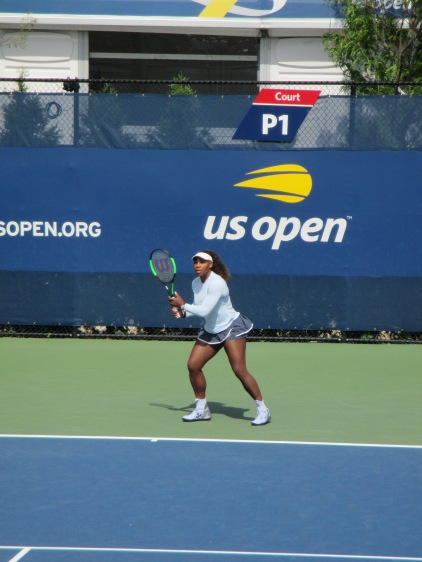 It was amazing to see so many famous players up close on the practice courts, like Kei Nishikori, Naomi Osaka, and one of my favorite players, Juan Martin del Potro.

Spending time at the U.S. Open is very flexible. Theoretically, you could sit at one practice court or stadium all day. I preferred to wander around the grounds. Whether it was a junior singles match or adult mixed doubles match, on the larger courts or the smaller ones, every match I saw was impressive.

This year, I bought a seat in the nosebleed section of Arthur Ashe for $95 as soon as the tickets went on sale in early June and went during the second round of the tournament. While it was nice to have a guaranteed seat, I enjoyed my day in 2018 more, for a couple of reasons.

Tips for Attending the U.S. Open

Bring a hat. Both years, I had a terrible headache by mid-afternoon from the heat. Unless you’re sitting in a shady area in one of the larger courts, a day at the U.S. Open is basically a full day in the sun. I also suggest bringing sunscreen and a small towel to wipe up sweat.

Bring empty water bottles. This is to avoid spending money on overpriced water.  There are water fountains everywhere, and you can also bring in a reasonable amount of food. Each time, I ate a big breakfast in the morning and brought a lot of snacks and fruit for the day. The only food I purchased was a hot dog, and that still cost $7.50…

Choose seating wisely. Do some research beforehand to learn which stadium sections have the most shade. In Arthur Ashe, I recommend sections with 30s, like 132 or 335.

Alexis, I’m not a tennis fan. Should I bother going?

100%, yes! You don’t need to be a raging tennis fan to have a fun time at the U.S. Open. The atmosphere is lively, people are generally in a friendly mood, and the stadiums can be absolutely electric during an exciting match. I’ll definitely be back next year!

Has anyone else been to the U.S. Open? Or does anyone else like to travel just for a sporting event? If so, let me know in the comments! I try to go to a sporting event or stadium whenever I go somewhere new. It’s a nice way to learn about a culture, not just about which sports are played but how they’re enjoyed by the fans.

So excited to enjoy these #cherryblossoms 🌸 The crowds were significantly smaller, which made #socialdistancing a lot easier. #washingtondc #spring #tidalbasin #dclife
Passing the time with puzzles #dclife #socialdistancing
I grew up with hurricanes, and this is still a bit much... Does anyone else feel like we’re living in some alternate reality? Why all the toilet paper?! #covid_19 #coronavirusitaly
#Throwback to B’s 1st trip to #NYC 🗽It was rainy and cold, but we made it work! #winter2020
It’s a wrap, 2019! I went back home to Tampa quite a few times, visited Turkey, hosted friends and family in DC, and most importantly, welcomed mi amor to the US. I’m feeling very positive about 2020!
I never listened to Will Smith’s “Welcome to Miami” as much as I have in the last 36 hours. #Miami #SouthBeach #SouthFlorida #roadtrip #winter2019